You are the only one who can cure the undead horde!

In Clerracks you fight against Zombies, Vampires, and Werewolves as you hold your own!  At your disposal are Clerics, Templars, and Medics that purify the undead and strengthen your defenses.

Keep Calm and Heal on!

The horde is coming! Heal them to restore your population and train new clerics:

Templars: The bulk of your defenses, Templars are cheap to train and hold their ground. [cost 3 population]

Zealots: Aggressive units. Expensive to train, but will wreak havoc on the enemy. Have a tendency to charge off the battlefield. [cost 10 population]

To train you units, select a unit type from the top, and click one of the dots on the field. This will begin construction of a new training tower, which, once completed, will release newly trained units.

Once every unit from a tower is defeated, the tower will collapse, allowing you to train new units. 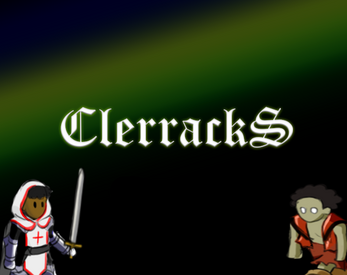